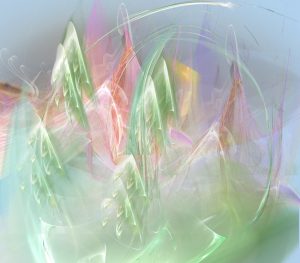 Once upon a time in a land far, far away in a region where dreams come true and possibilities were endless, there was a bare and bleak community in which the people had thought that miracles truly never existed.

The community sat in eternal twilight at the very bottom of the world that was made of solid ice because of the freezing temperature. There were only a few months of the year that the citizens saw sunlight and even then, it was only for a few hours a day.

Life was difficult to say the least. The people were caught up in survival. Each day was a new battle to be fought foraging for food, just to live yet another day. Childhood didn’t last long because it took every single person to ensure survival for the group. Toil and drudgery, hardships and unhappiness.

It was on an eternal twilight night near the end of the year that a slender fairy dressed in the most marvelous flimsy outfit made of ribbons, lace and jewels had gotten caught in a howling winter wind and had to land on the frozen tundra. Shivering in the cold with a slightly bent wing, she saw the lights of the village and rapidly made her way to find shelter.

She was just as surprised as the people who lived there when finally meeting each other face to face. The fairy was slight and dainty and scantily dressed, the citizens were heavy set and bundled so much that only their eyes showed. Of course, the fairy was brought inside immediately. The ladies oohhh’d and ahhhh’d over her gorgeous clothes and figure while sitting her in front of the fireplace, rubbing salve on her wing, wrapping her snugly in blankets and giving her a hot tea to drive away the chill.

The fairy told the village folks stories of the world they lived on, speaking about miracles and dreams coming true, where the possibilities were endless. The ladies were doubtful, the men openly mocked such tales and the children listened with awe.

In the morning – and how the villagers knew it was morning, one cannot say because it was just as dark as night – the fairy felt much better. When she stood and fluttered her wings, all was fine.

She told the folks to gather round because she had a present for the village for all the help that was unselfishly given. So, the group went outside and watched the fairy.

The fairy spoke about the joy of life beginning as if it were a growing thing and with one elegant gesture she opened her hand to show a huge glowing seed in her palm. There was one “ooooh” that was spoken in unison, as if a single note of a song.

The fairy stooped down and spoke about how love nurtures life. She kissed the seed and planted it the snow. The crowd bent forward to stare at the glowing spot in the snow but backed up rapidly as a fir tree began to grow. Again a wondrous “ooooh” was spoken in unison.

The fairy flittered up and plucked the stars from the sky, and then flittered back to place the stars on the tree. The stars played their own magic and lit the landscape with twinkling light which in turn made the villagers sing a melody of “ooohs” as the light changed in color, sound and motion.

Somehow (I wasn’t paying attention so I cannot explain how this happened) in the sky there were several rainbows. The fairy flittered up again, grabbed the red strand of the closest rainbow and tugged on it. Flying back to the now enormous fir tree, the fairy wound the rainbow as a garland round and round the tree. Repeatedly selecting strands of the rainbows in the sky, the fairy continued till the fir was covered in the most remarkable array of garlands that no one had ever seen before. The garlands were of course every color of a rainbow, and somehow rainbows may create more colors than at first meet the eye because the tree had garlands of gold and silver and candy cane stripes and red and green and spotted and tangerine and – well you get the idea, colors that one would never even believe were contained in a rainbow.

Of course, the village was singing a melody of “ooooohs” by now because of the interaction of each new addition. The “ooooh” song of the villagers was accompanied by the created music of the star-lights in motion, and the crystal flakes that fell from the sky and landed with a tinkling sound on the ice that the people called home.

Somehow the people got the idea that anything can be; that magic existed and that dreams do come true. Ideas started popping out of imaginations into reality and the land of ice became a wonderland.

The “ooooohs” became a ditty that day – one which was sung often and brought gaiety to the land forevermore.

May your Holidays be filled with the magic of the season.
May your dreams become reality.
May you have a happy, healthy, prosperous New Year.

One Reply to “A Christmas Fairy Tale” 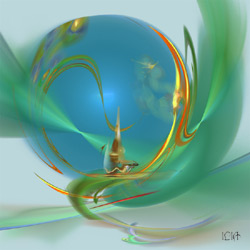 Donate and/or Deposit for a Dreamscape

Oh I saw that beautiful flitter right off the bat! Yes, we definitely need more wonder wabbits on pogo sticks fighting the evil on this planet! A story well written. C.C.

What a wonderful fairy tale! Keep blessing the world with your delightful writing! M.S.

This is just wonderful!! And I love the way you illustrated it! I hope that you have no objection to my sending it around to others. D.L.

Wau! Very nice. Great creation. Thanks for sharing the wonders and make it real to others, planting seeds of joy and pleasure in people’s hearts! Very nice, all the very best wishes to you too! M.B.

Thank you so much for sharing your latest story with us, it is beautiful and well written. As usual, you painted a wonderful picture with words and made the story become a reality as I read it. M.

I finally read this whole fairy tale. I just loved it!…My point is that your writing is a joy to read – I never get hung up on any errors. Not even typos. Amazing! E.S.

Thanks for sharing this story with me, I read it with my first cup of tea this morning. It is very good, well written and makes you want more as you read it. L.C.

Took me a while to get through it, but quite a tale! You have a gift for allegory, which I guess the best fairy tales are. Anyway, very very well done! R.S.

This haunting – love the flows in it. GH No name but it’s a glorious feeling in my heart. Splendid piece! TH I love this. Wish I could do something like this. Inspires me. LDS I like what you’re doing with these. CDW Wowowow!!!! So Beautiful!!!!!! CL It’s a very ethereal and beautiful work of art that speaks to me of something that’s not ‘something’ VL Gorgeous! GB it’s beautiful! JK It’s beautiful. JKM

Comments for Dreamscape An Entrance to Paradise

Love it, love it! PE I love the theta in this. CL It is lovely! MBD Wow CWS You have a fascinating technique, ILIA! A beautiful piece! MG It is just not fair Leigh-Ann. Each new one you do just hits home and someday I will surround myself with many of them. BL I love it. This is really a talent it is so theta. DC

ILIA, your dreamscapes are absolutely incredible. In that genre it doesn’t get any better than what you are doing. CR

Hi Leigh-Ann — Very beautiful piece you posted on April 22. I wanted to take a moment to explain the name suggestion I posted — Eternal Gift. The painting contains a blue sphere, which invokes the idea of a planet, but most of the imagery is senior to the sphere, which communicated to me that it is free of any mundane confines. Hence the term “Eternal.” Since it has beauty that contains creativity, rather than a randomly beautiful manifestation like the Horsehead or Crab Nebulae, it means there the source was a creative intelligence. This is conveyed with the word “Gift” — an offering by a sentient being to another sentient being. Wonderful work! Thanks for posting!  M.D.O.

Fabulous! You are a great artist!  TD

Your Dreamscapes are unbelievably aesthetic! I don’t know how you create these, but they are really, truly a work of art. I can think of many classical musical pieces that could be played while viewing these – your dreamscapes are soothing and pleasing to the soul, as it were.  They’re just gorgeous, and I’m utterly impressed with what they communicate. I’ll be looking at them many, many times. L.T.

I saw a child’s marble full of real fish, gracefully entering and sweeping, curving away, a real ocean in a crystaline globe. Then I was moved by the tiny stars in the marble’s infinite sky, then realized I needed to dust my computer screen — no stars! Oh well. Mainly impressed by the way what seem to be streaks of energy move into and out of more solid forms, suggesting whales, dolphins, eels, etc.  D.B.

Your intention comes through beautifully. A.F.

Very spiritual. Makes me wonder what the spirit of a flower would look like. S.R.

Dreamscape feedback for A Flower Unfurling

Outstanding!! I love the color and the way it flows! M.B.

Your beautiful piece reminded me of a book by that title where a girl was magically transported to a place I imagined looked like this. V.L.

— Regarding the Dreamscape: A Soul Emerges — Wow! Beautiful and protected and infinite on the inside as all beauty is. R.P.

Thank you, you beautiful artist!!!  L.S.

“This is the first time I have been excited about having something working for me. I have been approached so many times with phony or should we say ‘money making deals with less than integrity’. I can’t function that way….. I’m so excited that this is all I think, dream and pray about…I’m sure, that I’m sure, that I’m sure that this will be a successful venture for me….Thank you so much….” S.L.

“Thank you so much for this! I’m a songwriter and musician. Now I’ve got some ideas of things I can do and I know that there’s support out there. This is a wonderful service you are providing. Thank you so much.” A.R.G.